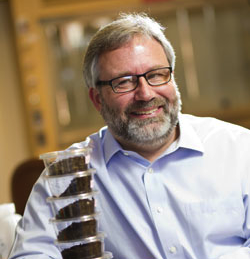 Allen J. Moore is a Distinguished Research Professor in the Department of Entomology and the Associate Dean for Research in the College of Agricultural and Environmental Sciences at the University of Georgia (USA). He began his career in the Department of Entomology at the University of Kentucky (USA) and then moved to the University of Manchester (UK) where he was Professor of Evolutionary Biology. He then moved to the University of Exeter (UK) where he was Professor of Evolutionary Genetics before returning to the USA in 2011. His research focuses on theoretical, quantitative genetic, and molecular genetic studies of evolutionary biology and behavior. His group studies the genetics and evolution of social interactions, focusing on sexual selection, parenting, mating behavior, and communication. A current focus is on the interplay between genes and behavioral flexibility. While at the University of Kentucky, he originated the theory of interacting phenotypes, incorporating indirect genetic effects (IGE) into models of social evolution, with Butch Brodie and Jason Wolf. Dr. Moore served as Secretary of the Society for the Study of Evolution, Editor-in-Chief of the Journal of Evolutionary Biology and is currently Editor-in-Chief of the open access journal Ecology and Evolution.

This lecture series was initially funded by a bequest to the AGA from Dr. Wilhemine Key for support of genetics initiatives for human welfare and improvement. Dr. Key earned her PhD from the University of Chicago in 1901, and taught at Lombard College, where Sewell Wright was her student. She later carried out pedigree studies of pioneer families that had emigrated from Germany to Pennsylvania in the late 18th century.

Previous Key Lecturers: [Bold names: An article based on the lecture is available from the Journal of Heredity online archives.  Access is free for AGA members.]